Streamline Discs are a new company by the same people that brought you MVP and Axiom. Right off the bat, you will notice these discs are more familiar to the other discs out there.

If you’ve experienced the MVP and Axiom discs then you know they all have the overmold design which has a ring around the outside of the disc in a different plastic than the middle section. The new Streamline discs are what they call a solo-mold, which is basically just the same as all the other discs, with only one type of plastic.

There are a couple things that make these really special though and unique from all the other solo molds out there. First off, it’s the price. With MVP and Axiom, they have been able to create a manufacturing process that is able to create overmold discs at the same competitive price as all the other companies solo molds. The thing is, they have been creating twice the disc for the same price. So now they are able to create solo molds in their well known, high quality plastics, for $11.95 – $13.95. This is the same Electron, Neutron and Proton plastic that MVP has already been putting out.

Being able to get high quality plastic, solo mold discs that don’t cost $17+ really breaks the mold! They don’t stop there though. These Streamline discs also come stock with up to 3 Foil Stamps on their discs. They are beautiful! Up until now, when a double stamp disc comes out, it would be very hyped up. Now, we have beautiful triple stamped discs sitting on our shelf for under $14.00, in top notch, durable plastic.

I have taken some pictures and to try and display the beauty of these discs, but you really have to see them in person if you haven’t. They currently have the Trace which is a distance driver and the Pilot which is a Putt & Approach disc. I have included the details of each below. Oh, and just to make a sweet deal even sweeter, they decided to use the well known 4 Number Flight system to help everyone familiarize themselves with these new discs. 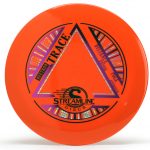 The Trace is a straight-stable distance driver.

The Trace has a manageable 21mm rim width and straight-stable flight that places it squarely in the Speed 11 Power Straight market. The Trace’s moderate dome is smooth and even, with a shoulder and depth that yields excellent glide. Most players will be able to stand the Trace up on a hyzerflip, but the Trace will soak up plenty of power before being pushed off its straight line. Its ending fade is smooth but dependable for easy ranging.

The Trace is currently the only Streamline disc in the 21mm Distance Driver class. 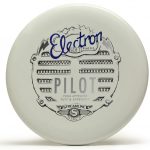 The Pilot is a versatile putter with a neutral flight profile.

The Pilot has a medium-depth grip, small-bead wing design, flat top, and a comfortable rounded nose. The Pilot’s feel in the hand with grippy Electron plastics will inspire confidence, while its dead straight flight takes you right to the pin. MVP throwers will find the Pilot’s depth in between the Atom and Anode, and its flight most similar to a seasoned Anode.

The Pilot is currently the only Streamline disc in the 10mm Putt / Approach class.

February 17, 2016 Comments Off on Consectetur aliquet